Famed author Dante Alighieri once wrote, “Art is the Grandchild of God.” God creates man, and then man creates art, making art just one more generation removed from God, so to speak. In modern architecture and art, that sense of art being an imitation of God’s creative power has clearly been lost, with a strong deviation from this traditional view evident throughout modern society. This state of affairs leads one to ask: how can this traditional view be restored again? Alumni artisans Michael Schmitt, Mandy Hain, and Corey Morgan are each working to do just that through their contributions to the new Christ the King Chapel, currently under construction. Together, they are working to beautify a sacred space that will impact generations of students, inspiring them through authentic, traditional art and architecture.

When planning began on Christendom’s new chapel, there was a desire from the start to build a church that would raise people’s minds toward God, like the great cathedrals and churches of past centuries did. That desire inspired Schmitt, Hain, and Morgan to want to contribute to the chapel through their artistic talents, giving back to their alma mater in a significant way while also assisting in an ecclesiastic project that would impact lives for the better.

“It is an honor to do something for my alma mater—especially something on this scale—that has a lasting quality; the chapel will be around for a very long time,” says Schmitt, who owns his own stonework company. “In general, this type of ecclesiastic project is very rare in the modern world because building methods and styles have changed a great deal over the past century. As a mason and carver, I’ve always wanted to focus on ecclesiastic work, but the opportunities to do so are few and far between. So, I was very excited and honored to be able to carve for the chapel.”

This story is featured in the latest issue of Instaurare Magazine. See more from Instaurare here!

Schmitt, who graduated from Christendom in 2002, has already completed his work for the chapel, carving the Latin inscription that will go over the front door: “HAEC EST DOMUS DEI ET PORTA COELI,” which means “THIS IS THE HOUSE OF GOD AND GATE OF HEAVEN.” The panel, which is about 24 feet long, was made using Indiana limestone, which is similar to the type of limestone used across Europe for thousands of years in the construction of countless cathedrals, monasteries, castles, palaces, houses, and more. 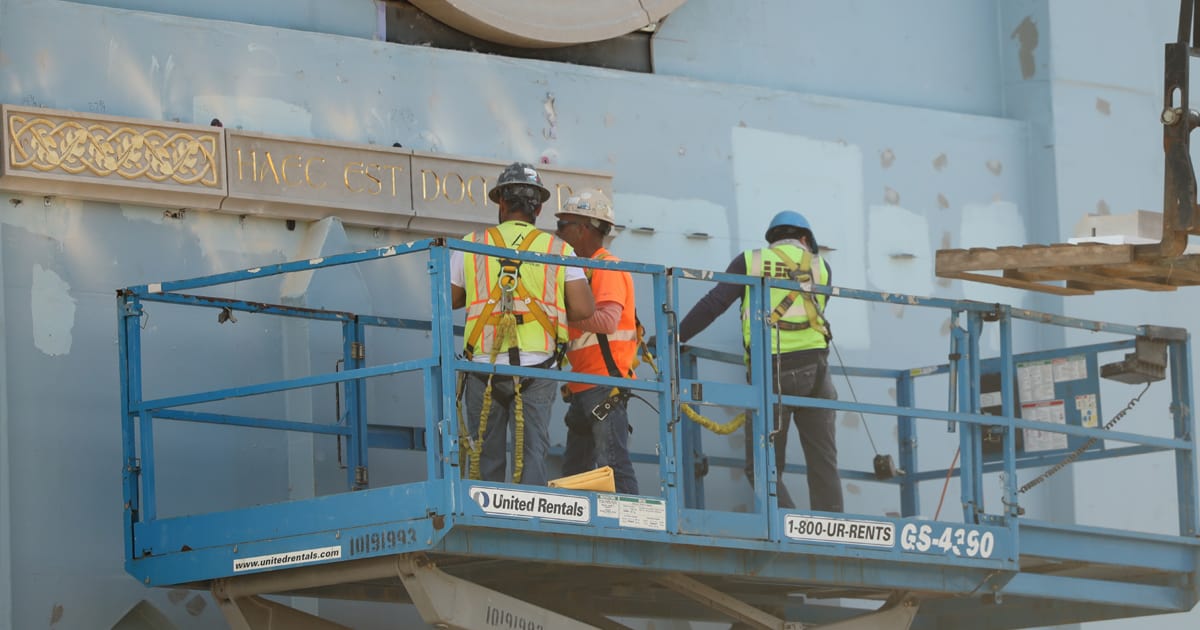 Continuing in that traditional mode, the stone panel was hand carved by Schmitt with a mallet and chisel. Schmitt chose to do the work by hand rather than using a stone blaster, further bringing back the medieval mindset and culture for the new chapel.

“The important thing is that the inscription actually reminds people of exactly what it says—the chapel with the Blessed Sacrament in it is truly the House of God and Gate of Heaven. The panel should help create a special and sacred aura at the chapel. It’s a signpost, so to speak—it points to God,” says Schmitt.

Like Schmitt, Morgan also wanted to contribute to the new Christ the King Chapel when it was first announced. Since graduating in 2008, Morgan has launched a woodworking business that focuses on residential furniture, including tables, benches, beds, and some cabinets. In 2012, Morgan took a leap of faith and stepped forward to complete the woodwork in a private, gothic-style chapel — a project that gained him several years’ worth of skills and led to further liturgical work as well, including sanctuary furnishings for St. Rita’s Catholic Church in Alexandria, Virginia. That work ultimately led to him joining the team working on the Christ the King Chapel.

“Being given an opportunity to have such a clear connection with the work of one’s hands being unto the glory of God is truly a blessing,” says Morgan. “It is also incredibly special to be able to give something lasting back to the college, literally out of the fruits that I gained while in attendance there, namely my love of the faith, and the inspiration to pursue the very life of craft I am living now.”

Morgan will be assisting the millwork contractor in the new chapel, who is responsible for all the hardwood floors, trim, paneling, and detailing throughout the project. In his case, he will primarily be focusing on the more decorative elements of the new chapel, such as the tracery work, as well as the arches, the side chapels, the confessionals, and an altar surround in “Our Lady’s Chapel,” which will reside behind the main high altar. 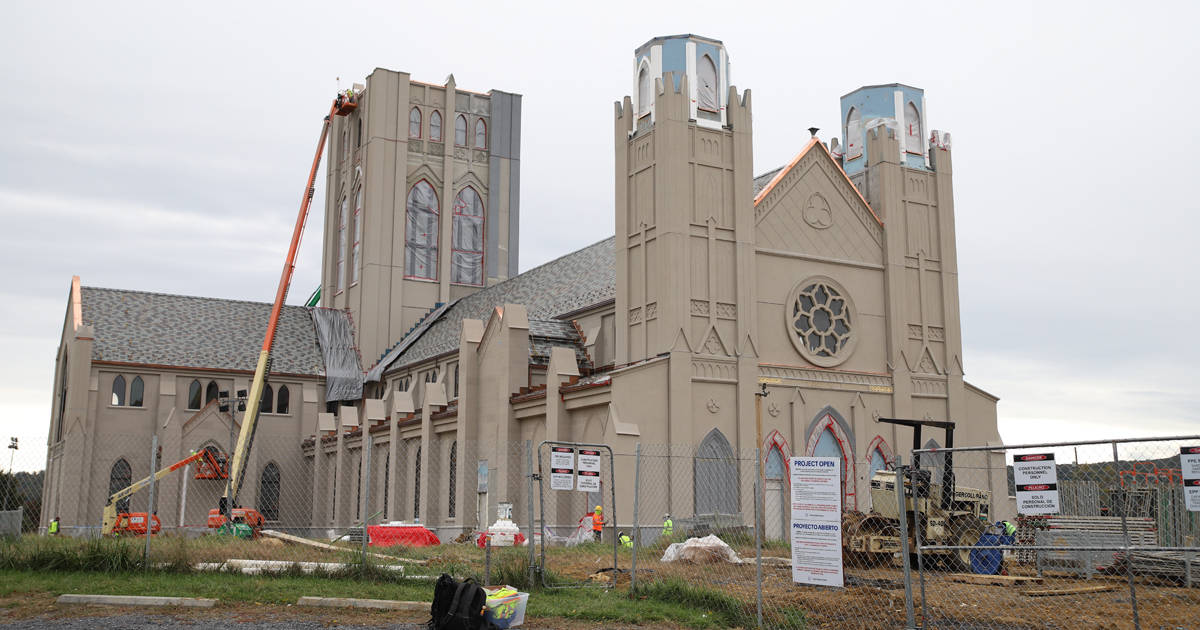 When Morgan reflects on how he would like his work to be remembered, he points to the Gothic cathedrals in France where one often does not know the names of those who crafted them.

“There was something perceptible about the faith of these men. If I can leave a legacy for those who enter the chapel, I would hope it can be of this kind. Now when it comes to me and my children, the idea of leaving a legacy is a real calling and challenge to be mindful of. I will absolutely be leaving them something tangible by this work. It is really beautiful to think that my own kids might one day be able to worship in a space that I had a hand in crafting,” says Morgan.

Hain is also cognizant of the effect the chapel will have on young souls, making her all the more grateful to contribute to the project. Since graduation, she has worked as an artist, particularly in beautifying churches. From decorative finishes, to statue restoration, to mural work and more, Hain has worked hard to bring man’s mind to God through art. She sees this newest project as a means, in particular, of celebrating Christ as King.

“I believe that it is of the greatest importance that the students, those in the community and any who may wander in having seen it from the highway be able to worship and meditate in a place of beauty,” says Hain. “Beauty is not an accessory. It is a necessity that has transformative, healing, and encouraging power.  It brings us to its source and makes us better without effort on our part. It is truly part of God’s order of mercy and redemption in this way. This is a dream I have for the students—that they encounter real beauty within the heart of Christendom, the Chapel of Christ the King.” 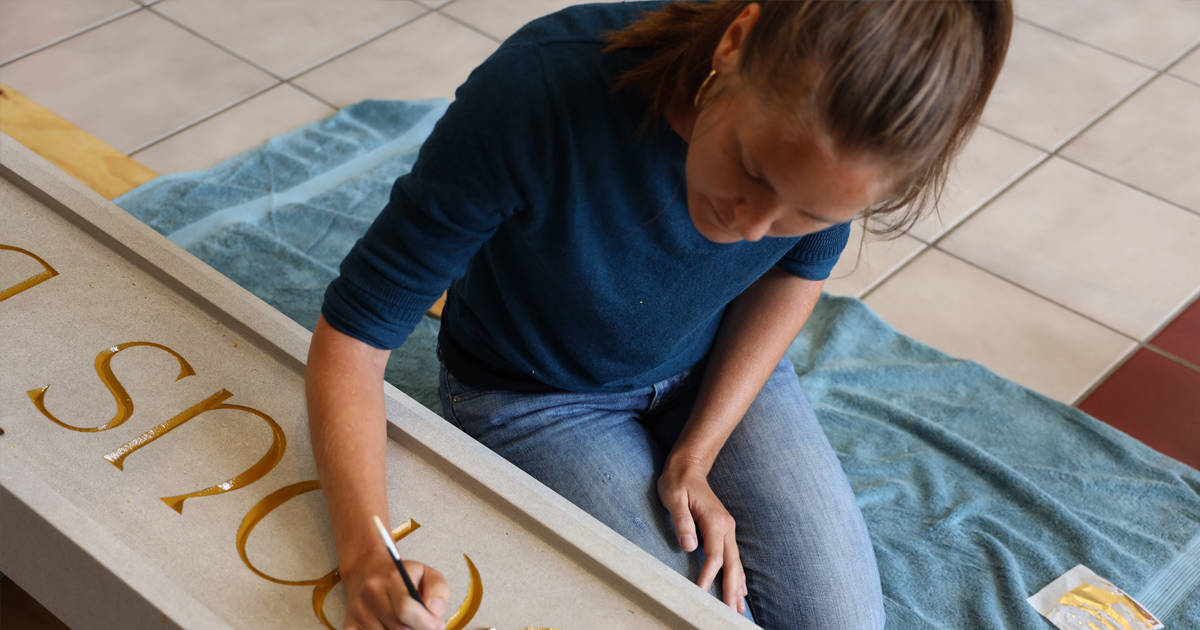 Hain will be creating artwork for the ceiling of the chapel, and some of the main focal points of the Sanctuary as well. Her artwork will have a quiet and contemplative tone, according to her, that calls one to inner stillness. The centric point of inspiration for her artwork will be that Christ the King breaks through the glorious Universe through the Eucharist, a reality that she hopes to symbolize through her art.

“Art for the Church is different than other kinds of art because it is an extension of the Liturgy itself; and additionally—in this case at Christendom—it is part of the formation of young souls. I admit that I have felt a kind of breathtaking realization that this is not simply an opportunity for artwork, it is an opportunity to answer a moral call,” concludes Hain.

When Christ the King Chapel is finished, it will stand as a reminder of Christ’s Kingship and as a source of hope and consolation for all who step foot in it. The work of Schmitt, Morgan, and Hain will contribute to that vision. Through stone, wood, and paint, these alumni are taking on the noble task of inspiring men and women to prayer and love of Christ—impacting countless souls for the better as a result.