Reaching the One True Light

The Power of Stained Glass Windows

When in 1135, Abbot Suger of St. Denis installed the prototype of a rose window in stained glass in the western façade of his church, he felt the work was so beautiful it required verse to describe it.

“Noble is the work,” the proud sponsor wrote, “but the work which shines here so nobly should lighten the hearts so that, through true lights they can reach the one true light, where Christ is the true door…”

From the completion of that architectural milestone, the art of stained glass grew to fulfill an ever-increasing role in beautifying sacred spaces, inspiring architectural achievement and transporting the faithful to God.

In the ancient world, colored glass had enjoyed great prestige for both its delicacy and light-reflecting quality. Phoenicians and Egyptians limited their use of glass to smaller luxury objects, but the Romans developed glass tiles in myriad colors that would form the glittering mosaic surfaces of the most opulent bath complexes and villas. Appreciative of the tremendous potential of colored glass to evoke transcendence, the early Christians perfected glass mosaics to embellish their most prestigious churches, from the Basilica of San Vitale in Ravenna to the splendid St. Mary Major in Rome.

The fall of the Roman Empire shattered the colored glass industry and only slowly did the art resurface, ultimately reaching its zenith in the splendid windows of Gothic cathedrals. Here, beauty stimulated architectural innovation and vice versa. As the creativity of the glass makers grew to develop more complex colors, from reds produced from copper or the mysterious “Chartres blue,” and artists could compose more intricate yet comprehensible iconographies, the engineers and architects of the cathedrals found more inventive ways to give more room to these great expanses of light and color.

Frequently, stained glass is considered the Bible of the illiterate, but the complexity of the programs required a far more advanced capacity to understand salvation history than found in today’s audiences. Medieval art, wrote historian Emile Male, “is first and foremost a sacred writing of which every artist must learn the characters.” Viewers were equally versed in this visual alphabet. The stories of saints with their special attributes or the histories of the Old and New Testament were so familiar that virtually any child in the day would have understood that a figure holding a palm frond was a martyr. The sleeping Jesse with a tree growing out of his side was well known as an image establishing the royal ancestry of Christ. The richness of the decoration, with its jewel tones and lacy patterns, reflected the dense tapestry of histories—prophets, kings, martyrs, and saints—that intertwined with the Divine plan of salvation. Stained glass windows were indeed a poor man’s Bible, an illuminated manuscript for the public, not locked away in a prince’s treasure room, but open and available for all.

From the outside, a Gothic church looks dark, but inside it glows. Instead of bright sunshine pouring in, light is filtered through a prism of color. This interiority, which reflects the human soul and the quiet of prayer, transforms the vast decorative cycles of stained glass into what thirteenth-century Dominican preacher Vincent de Beauvais would have described as the Speculum Maius or the “Great Mirror.” In it, the faithful found reflected a sort of compendium of all things—mirrors of nature, instruction, morals, and history. After the long absence of the natural world in Byzantine art, the created world returned in stained glass, where seasons, animals, plants, and human labor become part of the transcendent beauty of the space. The faithful, gazing at the Bible stories paired into typologies, deepened their understanding of sacraments and salvation. The examples of saints, from the glorious martyrs, peacefully glowing in their quatrefoil frames, to the holy lives of a St. Nicholas or a St. Martin or a St. Anthony shine forth as models of how to order one’s life to be able to join that radiant fold. And in the extensive programs proceeding from bay to bay, from apse to façade, decorative program becomes an unravelling of human history from the beginning of creation to the universal destiny of all humanity. 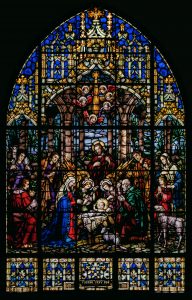 The Renaissance preferred painting to stained glass, although some remarkable examples remain, such as the 44 windows left in Brunelleschi’s masterpiece of the Florentine cathedral. The Baroque, however, eschewed stained glass entirely and, gradually, this extraordinary creative outlet was forgotten. The loss of numerous beautiful windows to war and revolutions was perhaps what galvanized both Europe and the United States to take a renewed interest in the art.

American Louis Comfort Tiffany and the British Arts and Crafts movement at the end of the 19th century rediscovered the techniques and aesthetics of stained glass. Where Tiffany’s designs were more secular, Edward Burn Jones’ and William Morris’ Crafts movement embraced arts like stained glass to reconnect the intellectual act of design to the manual act of craftsmanship and to combat against the anti-aesthetic, anti-formal, and sensationalist trends of Modern art.

This newfound appreciation for stained glass opened a door to a new approach to spirituality as a medium of great transcendent power, that also demanded careful and organized design. As the artistic revolutionaries who railed against perceived constraints of design and decorum began to age, stained glass for sacred space became a challenge that captivated these giants of color and sensation. Thanks to Fr. Marie-Alain Couturier, O.P., himself a designer of stained glass, Henri Matisse, after a lifetime of avoiding sacred subject matter, produced his first Christian masterpiece in the windows of the Rosary Chapel in Venice. Marc Chagall, a Jewish artist, spent much of his final years producing stained glass of religious subjects for both secular and sacred spaces, illuminating Jewish, Protestant, and Catholic interiors. He wrote, “for me a stained-glass window is a transparent partition between my heart and the heart of the world.”

Chagall’s words can perhaps offer a clue to explain the extraordinary universality of stained glass. It helps to dismantle the heavy masonry man erects against the spiritual world, and allows the beauty of light to enter the soul.

Elizabeth Lev teaches art and architecture courses for the Christendom College Junior Semester in Rome. After earning degrees from the University of Chicago and the University of Bologna, Lev became a denizen of Rome in 1997, giving tours of the city while also teaching art history for Duquesne University. With her dynamic and engaging speaking skills, Lev is now a highly sought tour guide, teacher, and public speaker. She has presented TED talks, and has appeared on ABC’s Nightline and the Today Show.

The new Christ the King Chapel will feature more than 50 stained glass windows, including a series of windows recovered and restored from other churches: eight aisle windows restored from the current chapel and eight brand new aisle windows. Additionally, 28 exquisite diamond-pattern colored-glass clerestory windows will fill the chapel with heavenly light.

You can remember your loved ones in perpetuity by dedicating one of the windows, which will each include a special honorary inscription. Every day, for many generations to come, students will be praying for you and your loved ones–arguably, until the Lord comes again!