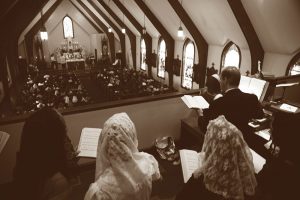 In a traditionally built church, the music of the choir seems to come from nowhere. It surrounds the congregation, almost like a chorus of invisible angels. The choir enjoys a certain amount of anonymity during the liturgy as they lift our hearts and minds with music sung from above and behind. For two anonymous benefactors, a desire to humbly serve the Church and to lift the hearts and minds of their fellow men motivated them to make a transformative gift.

Two anonymous benefactors experienced the choir this past spring and were mesmerized by the talent and beauty giving praise to God during one of the college community’s celebrations of the Stations of the Cross. The benefactors heard a polyphonic choir, accompanied by a traditional organ, along with hundreds of young Catholic voices filling Christ the King Chapel on a Friday night in Lent. It was enough to move them to obtain a generous $2 million grant through a private foundation that will enhance the experience and study of reverent liturgical music on campus.

As the centerpiece of this initiative, the grant will fund the construction of a traditional, custom-designed pipe organ that will be a beautiful fixture in the new Christ the King Chapel. 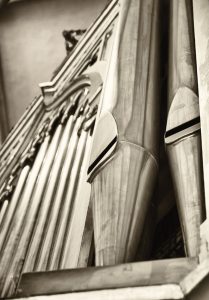 The benefactors particularly wanted to enable Christendom to train future parish organists. With the rise in the use of guitars and pianos and less traditional music at Mass, there has been a decline of church organists, a phenomenon noted by such professional organizations as the American Guild of Organists.

To address this challenge, funds from the grant will also be used to establish an organist certificate track, which would require two years of organ lessons, an internship in a parish, and the passing of the Service Playing Certificate exam of the American Guild of Organists, among other requirements. Although shorter and more practical in nature, it may be integrated with the currently offered liturgical music minor, increasing the minor requirements by jut three credits.

The grant will make it possible for students to benefit from the new programs by establishing an endowment that will fund up to three $5,000 scholarships for student organists who will be selected via audition. Choral scholarships will also be offered for students in the college’s Liturgical Music Minor.

The skilled musicians to emerge from Christendom will certainly join the ranks of the many other alumni who are already active in their parishes working to bring the beauty that they experienced in Christ the King Chapel to the liturgical life in America. Their anonymous voices—like these anonymous benefactors—are bringing hope to the world.