From Martyrs to Evangelizers

Advisory Board Member Seeks to Bring Souls to Christ 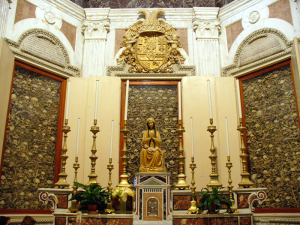 Shrine of the Martyrs of Otranto

College Advisory Board Member Eugene J. Zurlo and his wife, Charlotte, celebrated their 54th anniversary on August 11, a date which the Zurlos discovered had more significance than marking the day of their marriage.

“I was doing a little reading,” Gene relates, “and I stopped and asked Charlotte what the significance of August 11 was. ‘That’s our anniversary,’ she replied. I told her, ‘There’s another important anniversary. It’s the anniversary of the 800 Martyrs of Otranto.’”

St. Antonio Primaldi and his companions, also known as the Martyrs of Otranto, were 813 inhabitants of Otranto in southern Italy. One of those companions was Count Francesco Zurlo, an ancestor of the Zurlos and the military commander of the city. In 1480, the six thousand citizens of Otronto, led by Count Zurlo, refused to surrender to a massive Turkish force. They heroically held off the Turks for fifteen days until August 11, when the city was overrun and thousands were killed or enslaved. Count Zurlo fell defending the city. Shortly after, 800 men of Otronto became martyrs when they refused to convert to Islam. On May 13, 2013, Pope Francis canonized the martyrs of Otronto, including Francesco Zurlo.

The story of the Martyrs is a timely one given the recent martyrdoms of Catholics at the hands of Muslims in the Middle East, France, and beyond. Gene wants to follow in the footsteps of his ancestors by being a witness to the Faith and a part of a re-evangelization effort.

“I have tremendous gratitude for my life. I had great parents and was raised in a lovely community in northern New York. God has given me a lot, but most importantly He gave me a good wife and two wonderful children. I know that to whom much is given, much is expected. My life now—maybe the last 20 years—is to do as much as I can to bring souls to Christ,” he says. 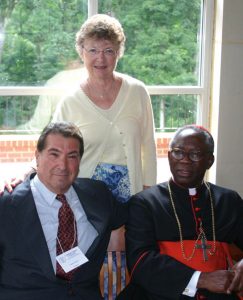 Gene saw Catholic radio as a key part in this effort to re-evangelize, inspiring him to be the co-founder and now Chairman-Emeritus of the Catholic Radio Association. The Association has assisted countless radio stations nationwide in starting up, including the college’s own Radio Christendom, which broadcasts Catholic radio 24/7 across the northern Shenandoah Valley on two frequencies.

Through his work with Catholic radio and other organizations, Gene is convinced that the Church needs more young leaders to drive the re-evangelization effort.

“We need to help people come back to Christ and have that great re-evangelization that was called for by Pope St. John Paul II. That re-evangelization needs leaders, and I think many of those leaders are going to come from Christendom College,” he says. “If you look at secular colleges, they’re really steering the graduates in the wrong direction, steering them away from any form of religion. They deny the existence of Truth.  If you look at the 200 or so Catholic colleges in the country—only a small handful of them can really be properly called Catholic.”

From the first time Gene and Charlotte set foot on Christendom’s campus, they were impressed by the holiness, faithfulness, joy, and kindness that they encountered among the students, faculty, and staff.

“Knowing the people at Christendom has been a joy and they inspire us with hope for the future,” he says. “As long as Christendom exists, we know that students will be properly educated in the liberal arts and the Catholic faith.”

The Zurlos’ firm belief that authentic Catholic higher education is the solution to many of the challenges that lie ahead for the Church led them to make an extraordinary multi-million dollar gift for the construction of the Christ the King Chapel. They gave their pledge along with a challenge to all men and women of good will to give sacrificially to the campaign.

“We want to make sure that Christendom has the financial resources it needs to attract top students who will assume leadership roles as we go forward. It’s an awfully big challenge we face, but we know that in the end, we will win. This means we have to make a good fight, and we have to be capable in making that fight. And we’re only going to be capable through a proper Catholic education.”